Colter, formerly known as Benny, came to 4Luv of Dog after a very traumatic experience. When he was first found, he was dragging his back legs and had no feeling in his tail.  He was placed with a loving 4Luv of Dog foster family. Colter’s foster family potty trained him, crate trained him, took him to puppy training at Downdog Studio and took him to Casselton Veterinary Hospital for chiropractic care.
When Colter (formerly known as Benny) was first adopted he was full of energy, constantly craving attention but not allowing anyone to pet him. We learned quickly, Colter was very smart. He learned new tricks within minutes and after a few months, in addition to the tricks he learned in puppy training (i.e. sit, lay, leave it, fetch), he understood commands like sit, shake, lay, speak, bow, place, play dead, walk forward, walk backward, sit in the corner, look, jump up, drink water, eat, and “Do you want go for a walk?,” in both English and Japanese.

Colter started to love snuggling, laying on or right beside us. As his foster family stated in his adoption profile description, he follows you everywhere and always wants to be in the know. He loves going to Yuppy Puppy Dog Hotel for daycare and sleepovers. He also loves to carry grocery bags to the kitchen, fetch deliveries from the front porch, go on long walks, swim, meet new people, and take naps.
Through continued chiropractic care and exercise, Colter has built even more strength in his back legs and regained feeling in his tail. He never allows his disability to stop him from living an enjoyable life. He has been on trips across the country, made lots of friends, and he even won a Halloween costume contest.
Recently, Colter visited his local veterinarian at Two Rivers Veterinary Hospital for a breed DNA test. Though Colter looks like a black Labrador Retriever, he is actually half German Shorthaired Pointer and half German Shepard.
In the past year and a half, Colter has become the perfect canine companion. He is definitely spoiled and loved. 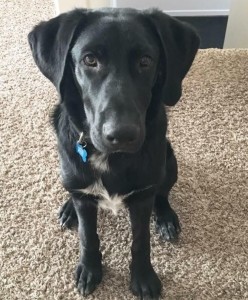