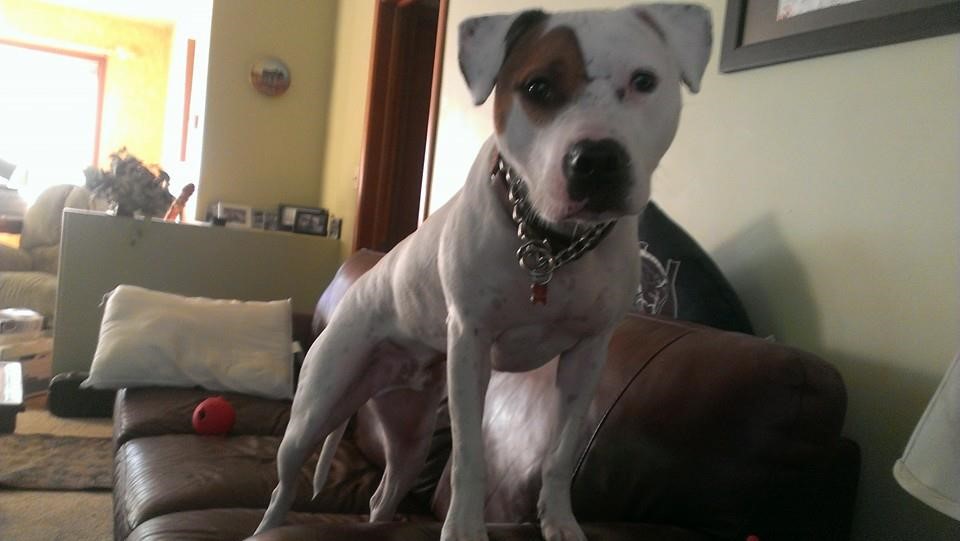 I met Odin when I went to an adoption event and was kind of “stuck” with him. He was stubborn, ill tempered, and charming as could be. The next week I took him out of boarding for a walk during which I learned he had no social skills at all….none. He had been found tied out with no food or water and rescued by 4 Luv of Dog. That kind of explains that. So, wanting a challenge, I agreed to foster him. I found out right away it was not going to be easy as he and one of my dogs did not hit it off, he had severe reactions to cheap dog food, and was stubborn…..I may have mentioned that before. He’s also a Pit Bull. I fostered him for over a year and got 1 application for him….one. I took him for a meeting and he did fine, but, for safety reasons (no fence) I said no. But, I realized then how much he had grown on me. Then, about the same time, I took in a 10 week old American Bulldog puppy. I was concerned Odin might harm the pup, but Odin actually adopted the pup as his own. He cared for her, looked out for her…..even let her do her teething on his face…and, that did it. I adopted him. A lot has transpired since then and I have now had Odin for 3 years. He and “his” pup are inseparable, he has become my buddy and he loves going with me anywhere; especially hiking or fishing new places….he loves adventure. His stubbornness gave way to a gentle, trusting nature, and I realized that a lot of his “issues” were due to fear of the unknown….how could he have been any other way? So, don’t tell anyone but, out of my 4 dogs, Odin is my favorite. He adores me and I do him. He would follow me anywhere…..and I would enjoy the companionship.