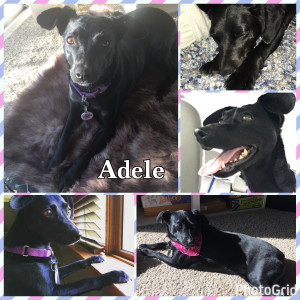 I grew up with golden retrievers and yellow labs so I always knew I’d have dogs of my own, but never in my life did I imagine I’d have two little black dogs! Sometimes life has other plans for us, though, and I’d love to tell you about my babies, Reptar and Adele (formerly Pepper Pots).

After getting married, my husband and I knew we wanted to get a dog but we never thought it was “the right time”. We constantly browsed the 4 Luv website just for fun, though. In 2014, a dog named Reptar was posted. My husband was immediately obsessed! I, however, thought the dog looked funny and wanted nothing to do with a small, black mutt. I wanted a golden!! Andy talked about this dog constantly and would show me pictures daily. One weekend when Andy had to work, there was a Meet the Dogs at PetSmart and Reptar was going to be there. I agreed to go meet this dog to prove I didn’t like him just so my husband would shut up about Reptar. WELL…I fell in love with Reptar the second I met him and I sped home to fill out an adoption application. My husband called and asked how it went and was shocked when I said I’d submitted an app for him. Shortly after, my favorite little weirdo officially became a member of our family.
We loved how much Reptar adored my mom’s dogs (a golden and a yellow lab), but again, it never seemed like “the right time” to get a second dog. Also, I was reluctant because I was very attached to Reptar and he actually became my assistive animal and helped me overcome severe anxiety. The universe had other plans for us in the summer of 2015! Dana Holscher, an amazing volunteer with 4 Luv, sent me a photo of the saddest looking dog from Standing Rock and said everyone was commenting that she looked like Reptar (he’s kind of hard to forget once you meet him haha). I text her back immediately and said I needed this dog! Dana was Pepper Potts’ foster mom and we “accidentally” ran into the two at Natural Pet Center right after Dana got her. Pepper Potts’ first reaction was to walk up to my husband and show him an endless amount of affection. It’s like she knew she needed to win him over and it absolutely worked!! A couple days later Reptar and Pepper Potts met and they hit it off perfectly. I guess it was time for us to get a second dog! We renamed her Adele because Reptar has a million nicknames, including many that are incredibly similar to “Pepper”.

To say adopting a rescue dog is easy is the biggest lie I could ever tell. We thought Reptar was a lot of work until we got Adele. Adele had extreme separation anxiety. She escaped from kennels and crates at her foster home, so knowing that would be an issue, we put 25 zip ties on her metal crate. What I didn’t expect was for her to shred the bottom of the crate and move it from one room to another, putting holes in the wall and shredding clothes on the floor in the process. When I was sobbing in our hallway because I was at my wits’ end, Andy suggested we return Adele, but that was absolutely not an option in my book. I took Adele back to the vet and let the vet know every non-prescription remedy for separation anxiety just wasn’t cutting it for Adele. She prescribed fluoxetine – we had to up the dose a couple times – but we’ve never looked back. We also added 60 lbs of landscaping pavers to the bottom of Adele’s kennel so she can’t move it even if she tried!
To say adopting a rescue dog is absolutely worth it is completely true. The love Reptar and Adele have for us is unbelievable. I honestly don’t remember what life was like before them! It is so rewarding to see them learn something new. Adele didn’t know how to “dog” for about a year but she awkwardly initiates play now and it brings tears to my eyes. Reptar loves to play fetch and tug and is an epic snuggler. Adele loves to chase birds and bunnies and gives an obnoxious amount of kisses. I am so proud of my babies and I’m so grateful for 4 Luv giving these dogs a chance at life. Our family wouldn’t be complete without your rescue efforts so for that we thank you!