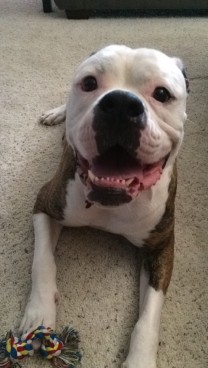 We met Rome, a 4 year old American Bulldog, in August of 2015 through fostering with 4 Luv of Dog Rescue. It took approximately 3 seconds before we fell in love with those droopy cheeks and big brown eyes. From that moment we knew that Rome was meant to be a part of our family! 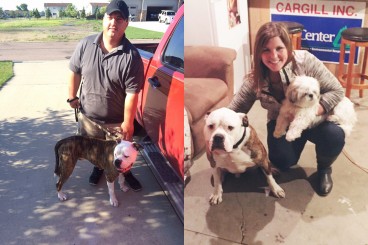 Initially we were a little hesitant to introduce him to our resident shih-tzu as they are 95 pounds different in size. However, after just a few days they had become the best of friends. Rome may look like a big tough guy, but he is a gentle giant at heart. He loves people of all ages and is especially gentle with his little fur brother. The two of them love to wrestle and Rome does a great job of controlling himself so that he doesn’t become too much for Bentley.
Some of Rome’s favorite things include: sleeping, eating (especially treats and whatever he can reach on the kitchen counter), going for long walks, riding in the car, and daily wrestling matches with Bentley. Life with Rome is pretty great and we are so thankful for all that 4 Luv of Dog Rescue has done for the dogs in our community and surrounding areas!
-Ben, Caitlin, Rome & Bentley