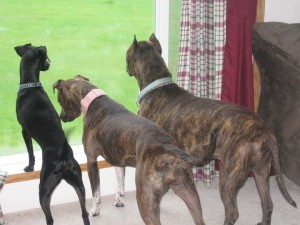 Before I was married I had two dogs that were my life.  Rusty the Dalmation and Chloe the Min Pin.  When I got married they accepted the new addition into our lives with open hearts.  A few years later we lost Rusty I was devastated but my wife surprised me with Bruno an Italian Greyhound, Rat Terrier cross.  Who had a rough beginning to his life. And he knew how to melt my heart.  He and Chloe were buds for about a year until Chloe got sick and we lost her too.  Devastated again.  But we grieved and when the time was right we started looking for our next love.  Now ever since Rusty had passed I missed having a big dog so I told my wife we were getting a big dog again.  I told her I wanted a Pit Bull.  Not because I thought they were the coolest dogs but because I knew they had a bad rap and needed the most help.   She refused and said absolutely not.  We started going to adoption days and meeting the dogs.  I kept gravitating toward the pits and my wife finally started to warm to the idea a little.  But was still a bit nervous.  Kish came over and was talking to us and asked my wife if she would consider a pup?  Maybe she said.  So we drove over to Jamie’s house to meet Ruby.  Bruno came with and it was love at first sight.  They played and played and made all of us laugh so hard that I knew my wife was hooked.  So Ruby came home with us a few days later and has been Bruno’s girl ever since.

Now we will fast forward a couple of years.  I had been wanting to foster for 4 Luv for a while.  I was waiting for the right dog.  Well when I saw Bert was back at the kennel and no longer had a foster I knew he was coming to our house.  So I put in that I wanted to foster Bert and a few days later I was meeting Sam to pick him up.  Ruby came with to break the Ice.  But there were no issues and I was walking them together almost immediately.  After a week or so he started to come out of his shell.  And come out he did.  He is a completely different dog.  Happy, bouncy, cuddly and a big giant lap dog.    A real gentle giant.  My 2 year old niece will attest to that.  Well I fostered him for a few months and never had anyone show any interest in him at all.  I was made a job offer in another state and couldn’t refuse it.  And I knew that I couldn’t let Bert go back into the kennel.  Especially knowing how depressed he actually was when I first got him.  So I adopted him. 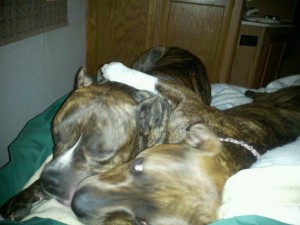 So now Ruby and he are in Oklahoma with Bruno, my self and the two newest additions to the family. Wesley a Lab pup that we rescued down here and The Blue Baron a blue and white pit pup.  Everyone gets along great and play even better.

Bert absolutely loves the pups and his allergies are almost none existent any more.  We are just one big happy family!!  Trying to show the world that pits are gentle giants that are just misunderstood.

Thank you to 4 Luv of Dog Rescue and all the people and volunteers that are trying so hard rescue every animal out there.  And I promise to do the same everywhere that I go.  And you guys know that if you ever need help and I am able,  I will be the first to volunteer.